The following tables include the main weapon systems in service with the Navy (PN) and the Turkish Navy ( Turk Deniz Kuvvetleri: TDK). Warships accompanied by their side numbers and in brackets refer weapon systems are at the receiving stage. aggregate:

During 2017 it is planned to complete the testing board of KATSONIS submarine (S123) Type 214HN and operational integration Flotilla, which will result in an increase to five the total number of submarines Propulsion Independent Air System (AIP) Navy (HN). With 11 submarines in service, the Navy is in the historic peak of the submarine force, though their weapons continues and is based primarily on torpedoes type SUT and SST-4, with the expressed need for procurement of modern heavy torpedoes to shift in the future. Moreover, this year is expected to complete the supply of the last two Type 209/1100 submarines with new battery packs while the Navy maintains as main objective the procurement of two additional submarines PAPANICOLIS class, but the final decision will be taken based on the outcome of judicial conflict of Greek government with HSY.

The construction program six submarines class REIS Type 214TN of TDK presents significant time drift, with delivery of the first vessel has been postponed until 2023. In the meantime, the TDK has launched a program to modernize the submarines Type 209/1400 with the contest being ongoing. The fleet submarine TDK medium will further shrink, through anticipated withdrawal BATIRAY (S349).

In the barrage of these developments just contrasted the Modernization of Middle Life (MLU) six frigates class ELLI of HN, who lengthen their lifespan, increased reliability and availability of their subsystems and upgraded navigation equipment, battle management and electronic warfare, but left intact the installed weapon systems, thus contributing marginally to limit the qualitative superiority of TDK. Therefore, and given the short term weakness numerical strengthening of the main fleet units of the Navy, this task is left now only the highly anticipated Modernization Middle Life four frigates class HYDRA of HN, which now becomes urgent, given the age of the ship, which joined in service between 1992 and 1998.

The Navy utilizes a total of 17 gunboats, of which five Roussen class have the fullest potential Surface Warfare between all types of PCB in the Aegean. Underway is the replacement of addressable Penguin missile Harpoon with five gunboats Class KAVALOUDIS while receiving under construction sixth and seventh PCB type Super Vita (KARATHANASIS and VLACHAKOS respectively) will allow the decommissioned three press 148. The fleet consists TPC of TDK by vessels three classes with staggered upgraded electronic surveillance equipment, fire control and battle management, but identical main armament main guns and guided missiles Harpoon.

The TDK completed receipts 16 TUZLA class patrol boats, whose main task is the antisubmarine patrol dockyard facilities and approaches, as indicated by the installation source and commercial sonar antisubmarine rocket launcher. Conversely, the more extensive electronic equipment and the heavier main armament of the Navy gunboat modern reveals the intention to use them to escort roles and surface surveillance.

The proximity of the Sea islands to Asia Minor explains the preference of TDK in boats Landing Tank (LCT), which constitute the bulk of the Turkish landing fleet. The proximity of port facilities Management Landing Ship with Brigade Marines has obvious operational (and not only) benefits. All three Navy Vessels have registration prefix NL, suggesting that they have as main task the mining of. This situation is expected to change with the delivery of two new Navy Vessel Class BAYRAKTAR, with extensive air surveillance equipment, battle management and defense against missiles. Furthermore, in progress is the construction of the helicopter landing Tank (LHD) ANADOLU (L400), drawing the Spanish Navantia, displacement 27436 tons, with a ramp aponiosis and reception capability 10.8 fighter F-35B type, which is expected to enter service in the year 2021. for its part, the Navy builds five Navy Vessels class SAMOS, despite the provision for seven of the Force Structure from 2005 to 2015, and the Ships Fast Zubr type Transmission (during NATO: Pomornik) for business development needs of 32 Marine Brigade.

The geography of the Straits and the Turkish coastline explains the extensive fleet of Mine TDK, of which AYDIN ​​class boats are built from steel and feature amagnitiko narkothirias high technology systems. The corresponding equipment of the Navy Mine particular type Osprey, sufficient for the execution of their mission, but not the total number of only four ships Narkopolemou Administration.

The massive investment of TDK in the Navy Air Force took place after the announcement of procurement and modernization programs of the Navy submarine. As a result, the TDK acquired extensive fleet submarine modern helicopters, the proportion of which by main fleet unit with corresponding host capability far exceeding that of the HN. Also, after years of delay, received six naval cooperation aircraft CN-235D / K, which have remarkable submarine detection equipment and surface targets and battlefield management, before the commencement of deliveries equal number of ATR 72-600T MPA, with identical equipment, which is expected to begin in April 2017 and be completed in late 2018.

The HN focuses on the acquisition to 10 used submarine S-70 Sea Hawk from US replacement of AB-212ASW helicopters and reactivation to 4 aircraft naval cooperation P-3B Orion under Modernization Program Middle Life, which comprises extending their life expectancy 15,000 hours in flight and the installation of modern surface surveillance equipment, as opposed to anti-submarine warfare equipment, for which any official information is missing.

The Navy is organized and trained by NATO standards, which also follows and in operational planning. In the Navy General Staff (Navy) under the Fleet Headquarters (PM), Administrative Management Navy Welfare (DDMN) and the Naval Training Command (NED).

Turkish Naval Forces Command Headquarters under the Fleet Management North Sea Area, the South Sea Area Command and the Naval Training Command. Unlike the Navy that develops almost exclusively permanent staff for the staffing of the ship, the TDK relies heavily on conscripts, who make up about 60% of the total staff. 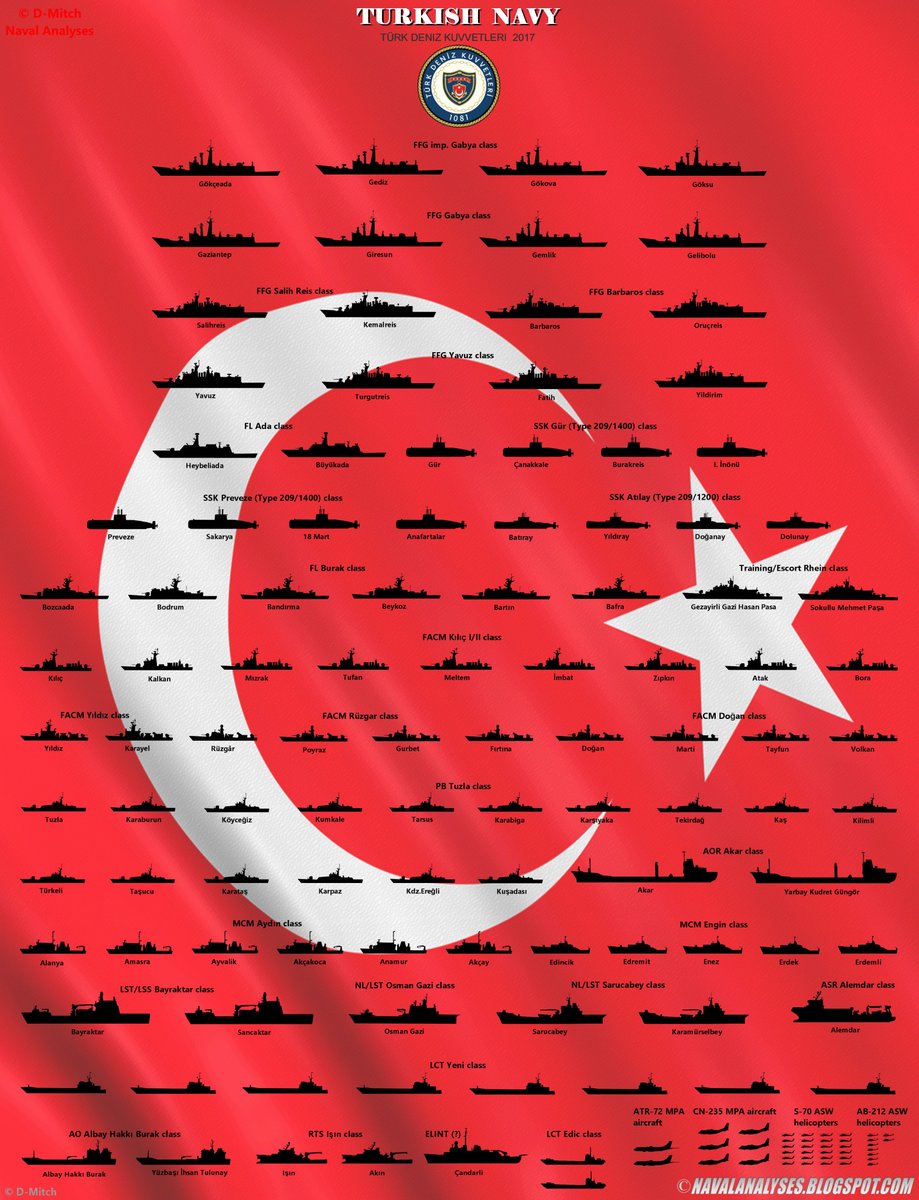 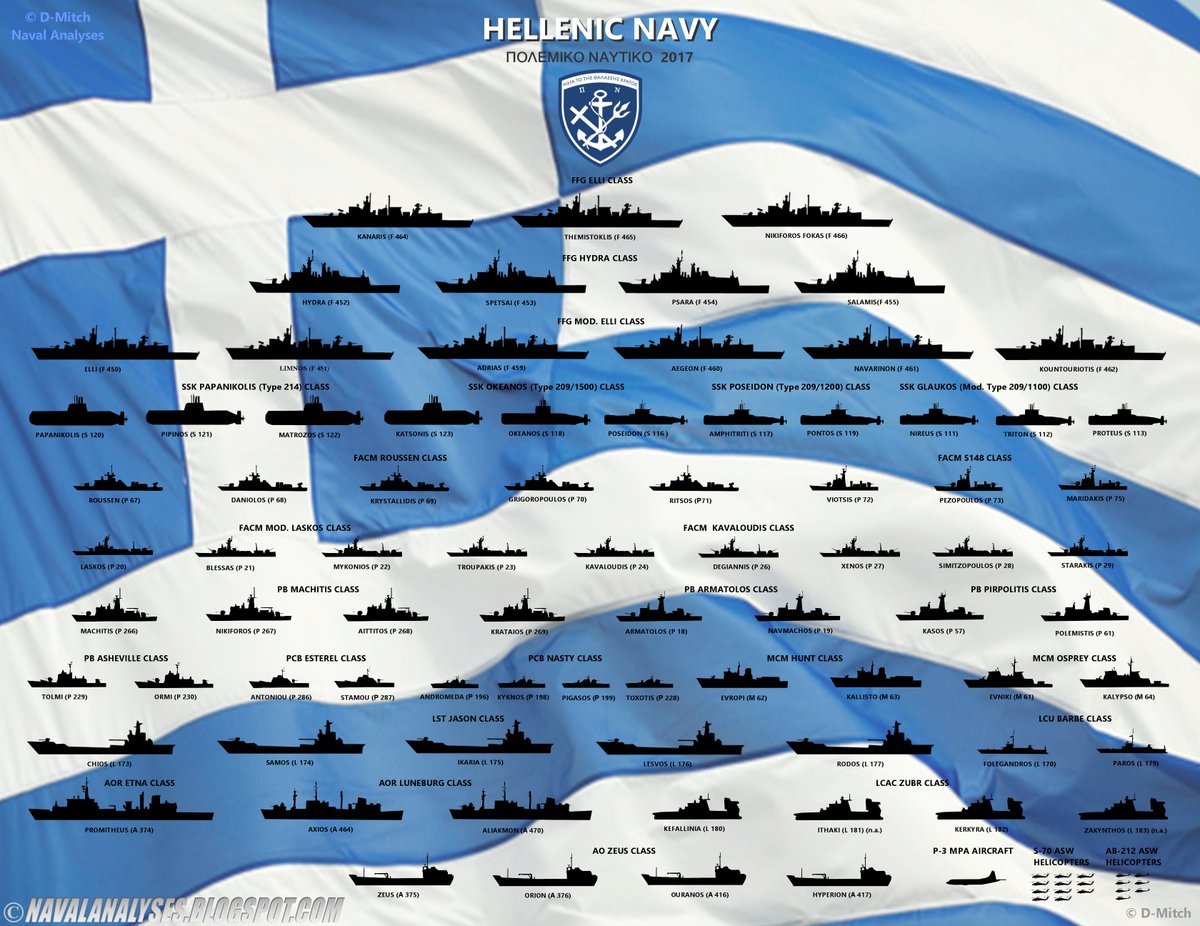 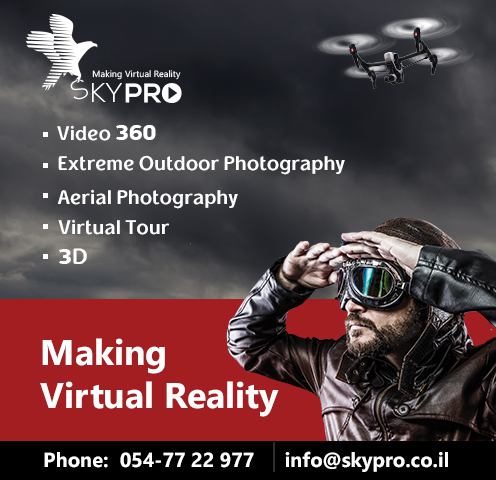